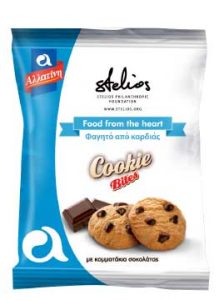 As part of its Corporate Social Responsibility initiatives, ELBISCO supports the Food from the Heart charity action, organized by the Stelios Philanthropic Foundation.

Specifically, the company has developed a co-branded 70 g pack of Allatini cookies, distributed to vulnerable social groups free of charge through the Stelios Philanthropic Foundation. Product deliveries began on July 25 and so far over 200,000 packs have been delivered to 3 distribution points of the Foundation in Attica. This action will continue in the coming months, with the aim of delivering a total of 500,000 items by January 2018.

The Food from the Heart action is an initiative of the Stelios Haji-Ioannou Philanthropic Foundation, aiming to offer free snacks and a smile from the heart to people in need, without any racial, religious or social discrimination. The initiative was launched in Cyprus in 2013 and later expanded to Greece.

In recognition of the harsh economic and social reality that has been prevailing in the country in recent years, ELBISCO takes active part – through a wide network of partners – in the effort to assist people experiencing food problems. By supporting the local government bodies and organization, as well as recognized charities and NGOs, it has offered a significant number of its products over the last 2 years to meet the food needs of refugees and migrants in Greece, but also families from vulnerable social groups.