The new investment is part of the company’s investment programme worth 17m Euro.

The new bread production line at the ELBISCO factory in Pikermi, Attica, was officially inaugurated on Tuesday 16 December, in the presence of the Deputy Minister for Development and Competitiveness, Mr Mitarakis, Members of Parliament and representatives of local authorities.

The new production line represents an investment of 5 million Euro, completed in April 2014 and forming part of the ELBISCO investment programme worth 17million Euro.

The new, state-of-the-art production line will assist the company’s strategy of consolidating its position in the brand-name, sliced bread sector, under the brand Kris Kris, and of reinforcing its presence in the own-label sector. 15% of the cost of the investment was met from the support framework provided by the Investment Act (Law 3908/2011).

At the official inauguration ceremony, the Deputy Minister for Development and Competitiveness, Mr Notis Mitarakis, made the following remarks: ”In the extremely critical economic circumstances faced by our country, as we emerge from the turmoil of the most serious financial crisis, we can take comfort, and much cause for optimism, in the completion of major investment schemes. Such schemes are important not only because they safeguard jobs, but also because they lay the foundations for increased levels of employment, production and exports, all so vitally necessary to the Greek economy.

The country’s economic model is changing. From a model based on borrowing, consumption and public spending, to a model based on exports, investment, competitiveness and the private sector. The results are already there to be seen.”

The Managing Director of ELBISCO, Mr Dimosthenis Ramantanis, spoke of the company’s development strategy for the coming years, emphasizing that:

“Each of the investments we implement is a step into the future. A step towards safeguarding the sound and dynamic future expansion of our company. We shall continue along our path; with the support of our shareholders, with contemporary structures and through the dedicated work of our personnel, we shall continue to innovate. We shall continue to create new products combining advances in food science and technology with the dietary habits and wishes of our customers. 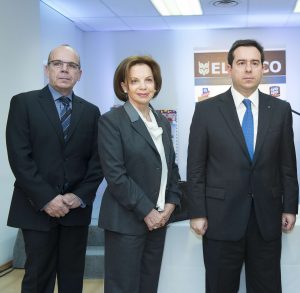 99% of ELBISCO’s turnover is accounted for by products made in Greece and exported to more than 20 international destinations. The company employs a total workforce of 780, following increases over the last two years. In 2013 ELBISCO’s turnover reached 100m Euro. Since 2008, despite the recession, the company has managed an overall increase in gross receipts of 15%, while profits before tax, interest and depreciation (EBITDA) have risen by 50%.